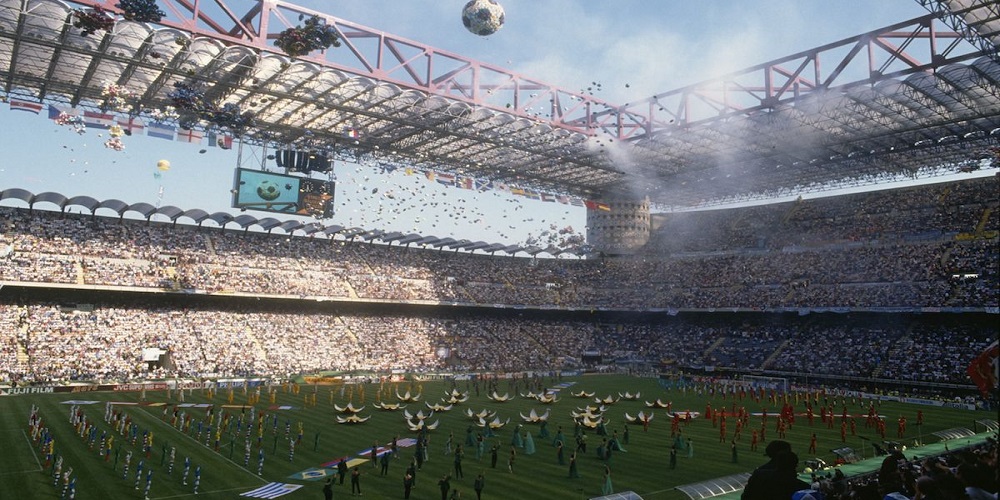 As World Cup tournaments go, Italia ‘90 seems to split opinion more than most, with those who absolutely loved it, and those who say it wasn't as good as the hype suggests. The football purists will tell you that the standard of football was poor, the goals-per-game stats were the lowest there'd ever been, whilst the number of red cards was the highest, symptomatic of the cynical football on show. However, the other side of the Italia '90 fence will argue that it was fantastic, the last old-school World Cup before it became heavily commercialised, with plenty of unforgettable drama, a great atmosphere, and lots of fantastic stories and sub-plots going on throughout the tournament.

We're definitely in the nostalgic camp that looks back with a high degree of love. Why? Well, despite the lack of goals there were plenty of talking points, with great stories emerging throughout the tournament. The rise of Toto Schillaci, Maradona's battle-hardened Argentina taking on a rejuvenated Italy in his adopted city, the Republic of Ireland living the dream, huge rivalries clashing in the knockout stages as West Germany met Holland and Brazil met Argentina, Cameroon showing African nations the way, and England coming agonisingly close to a first final since 1966.

And, whilst there was enough drama on the pitch to keep us entertained, we also found plenty to love off it too - a brilliant logo, the greatest football mascot ever, one of the greatest football theme tunes ever, an iconic ball, the best World Cup squad song ever (despite most of the squad not turning up), and as English fans, it was great not to have a tournament constantly blighted by hooligan problems.

Oh yes, and we completed the Panini album. And kept it.

A quality logo for Italia '90.

That three-colour ball, and that iconic stencil-like font - superb.

Italian striker Salvatore Schillaci was one of the great stories of Italia'90, coming from nowhere to top the scoring charts with six goals. Schillaci started Italy's first match against Austria on the bench, but replaced Andrea Carnevale after 75 minutes and scored the decisive goal just three minutes later.

Schillaci eventually got a starting place in their final group match against Czechoslovakia, starting up front alongside Roberto Baggio, Italy winning 2-0, with Schillaci and Baggio both scoring. Schillaci kept his place in the starting line-up and scored again in the first knock-out game, against Uruguay, and then bagged the only goal in the quarter-final victory over the Republic of Ireland.

He kept his incredible run going in the semi-final against Argentina, opening the scoring after seventeen minutes, but sadly the Azzurri went out on penalties. Finally, he scored his sixth goal of the tournament in the third-place play-off against England, slotting home a late penalty.

Incredibly, Schillaci would score only one other goal for Italy during his entire career, so six of the seven international goals that he scored were during Italia '90. 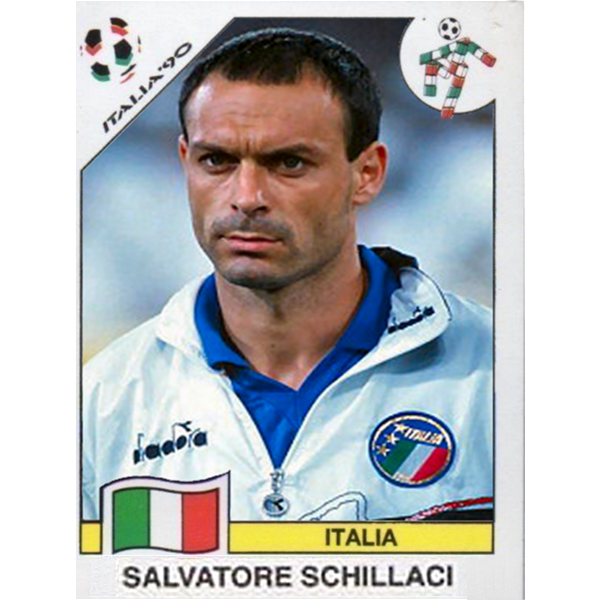 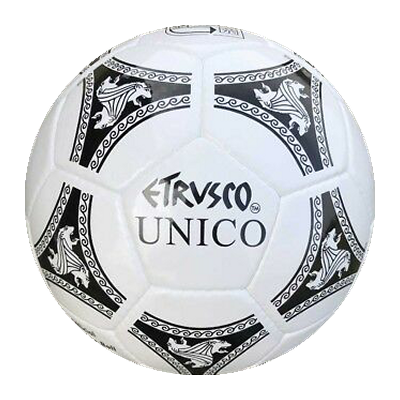 Another simply beautiful football by adidas.

Following on from the Azteca of Mexico '86, the Etrusco Unico kept the pattern of the Tango family but was decorated in the art-style of the Etruscans (an ancient civilization of Italy) with three Etruscan lion-heads in each of the triad shapes. 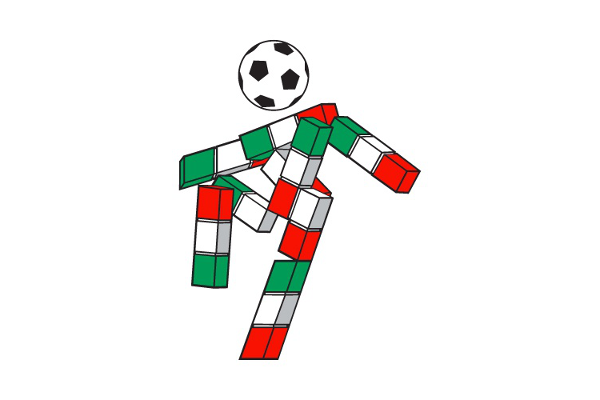 "Ciao" - the greatest World Cup mascot bar none. Yes, it's a bit surreal and probably shouldn't work, but it does. Fantastico! 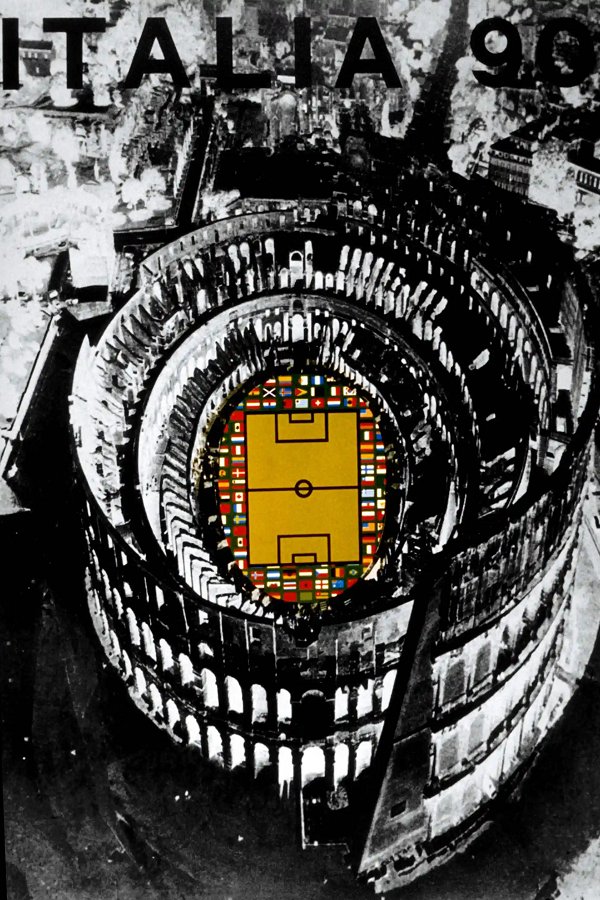 Whilst the official Italia '90 logo and mascot were both quite bright and cheery, the official tournament poster had a certain darkness to it. But, as with everything else at this World Cup, it was still effortlessly cool with the way the flags and the pitch appeared in the bottom of the Colosseum. 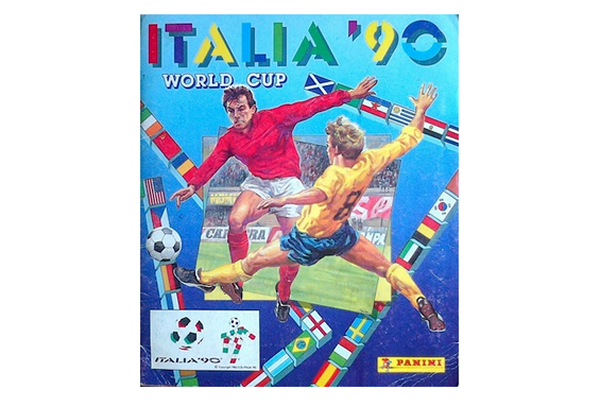 This was the sixth World Cup Panini album, made up of 448 stickers on 48 pages.

As with most things Italian in the 90s, it was cool, filled with an array of top-notch players from the 80s and 90s. It was nice to see the stadium stickers accompanied by a photo of the corresponding city as well. 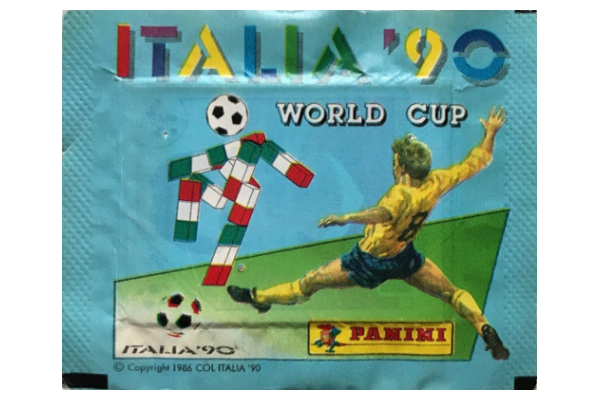 A great Panini packet, featuring an horrendous lunge from a Swedish player on the iconic Italia'90 mascot, Ciao!