Diego Maradona celebrates his wonder goal against England in 1986.

Other players may have scored more goals or won more medals, but no-one else has made us want to watch or play football as Maradona did. Whilst growing up in the late 1970s and early 1980s, we were left open-mouthed at some of the things that Maradona was doing, such as the first time we'd seen a reverse stepover and a rabona in the match against Switzerland in 1980. Yes, he had plenty of faults and had to fight his own personal demons along the way, but that's what we love about Maradona. Despite all of the issues and everything that went on, this loveable rogue still captured the imagination and managed to drive his teams on to glory against the odds, not only thanks to his footballing genius but also his leadership, passion and charisma. The famous game against England at Mexico '86 almost summed Maradona up - mischief with one goal, then genius with the next.

Diego Maradona is one of the few genuine boy wonders who went on to live up to the hype. And then some! He made his professional debut as a fifteen-year-old in a match for Argentinos Juniors against Talleres de Córdoba on 20th October 1976. It took just a few minutes for those watching to realise they were witnessing the start of something special when Maradona, faced by Talleres midfielder Juan Cabrera, did a cheeky nutmeg, skipped passed him, and was yards away before Cabrera knew what had hit him. It was the start of a glorious career, full of skill, invention and a bit of devilment.

Maradona's dribbling and close control were incredible. When he ran with the ball it almost seemed as though it had somehow been connected to his foot, whilst his small size and low centre of gravity meant he could twist, turn and accelerate incredibly quickly Yet despite all of the skills and tricks at his disposal, Maradona didn't partake in showboating just for the sake of his. One of his best attributes was knowing when to use skill and when to play it simple. If he needed to beat a man to create an opportunity to play a team-mate in, then he would, but if he could play a team-mate in immediately with a short pass, then that's what Maradona would do. His speed of thought and decision-making on the pitch were unparalleled. 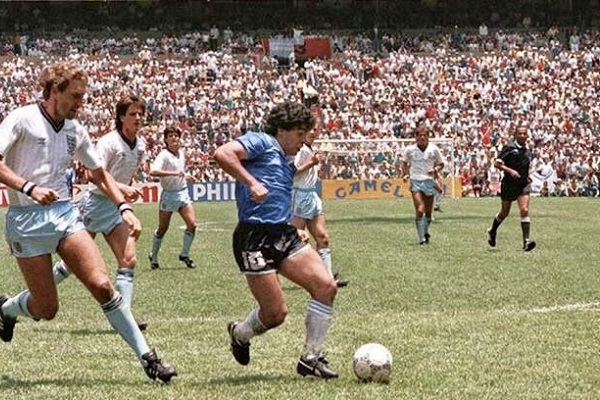 Maradona's dead-ball expertise gave him another string to his bow. Not only was he normally deadly and cool as a cucumber when taking penalties, but he was also one of football's greatest free-kick specialists. With such great technique, it was no surprise to see him bending balls around the wall from long distance, or being able to get it up and over the wall from the tightest of spaces on the edge of the penalty area. The stats show that Maradona scored 62 goals from direct free-kicks, a conversion rate which is right up there with the very best dead-ball specialists.

Simarly to Lionel Messi, Maradona was extremely left-footed. Some people suggested that he was too left-footed, but he seemed to cope okay! For instance, when he scored the "Goal of the Century" against England in the 1986 World Cup quarter-final, Maradona didn't use his right foot once, despite running with the ball for over half the length of the pitch down the right-hand side! It was impossible to score such a beautiful goal using only one foot. And in the semi-final against Belgium he scored another incredible solo goal and nearly did exactly the same thing, but this time he did briefly control the ball with his right foot before setting off and then solely using his left. Two incredible goals, proving once and for all that you don't need to be two-footed if one of your feet is as good as that!

As well as being exceedingly dangerous running with the ball, Maradona had tremendous vision and passing, his number of assists was incredible. And if he wasn't creating opportunities for team-mates then he was putting away chances for himself - his goalscoring rate was excellent, whilst his dead-ball skills made him extremely dangerous with free-kicks.

An incredibly dynamic player and strong too, Maradona's small size was deceiving, his stocky build and huge thighs, coupled with his tremendous balance, making it really hard to knock him off the ball..

Maradona also had other qualities to go alongside the technical and physical attributes. He was charismatic and a natural leader. Not only did his talent command instant respect, but his personality did too. One of his team-mates once said that Maradona took the pressure off his team for two reasons. Firstly, they went out on to the pitch knowing they already had an advantage because they had Maradona in their team. And secondly, they also had less pressure on them because, if they lost, Maradona would absorb the majority of the blame. Why? Well, so much of the focus was on Maradona individually, instead of all of the other players in the team. So, the implication was that many team-mates loved playing with Diego because they could effectively play with less pressure themselves!

Maradona's story, from those early days in Argentina with Argentinos Juniors and Boca Juniors, on to Barcelona, and then the glory days with Napoli and Argentina, is an emotional roller coaster of ups and downs, but his incredible footballing heights will always be remembered more than any of the lows.