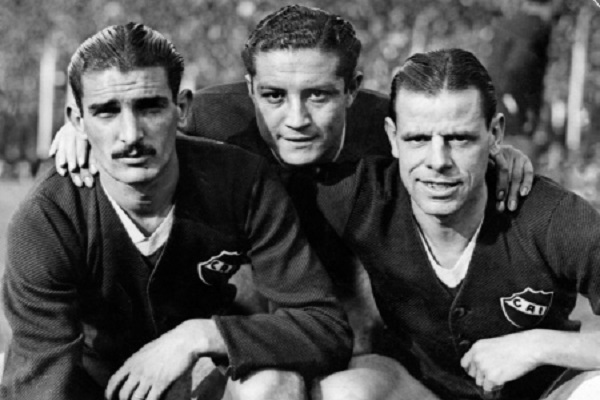 Antonio Sastre was a rare breed indeed - a pre-war playmaker, one of the first of their kind, some even say that he invented the modern playmaking style in Argentina. He would become one of the biggest influences on future players of his ilk. Sastre was also known as one of the first players to be noted for his ability to adapt to almost any position on the pitch, his coolness on the ball and tactical intelligence helped him create his very own 1930s version of Total Football. Despite his flexibility, his intelligence and skill on the ball meant that he was best-suited playing along the front line, and he was most dangerous when dropping behind an out-and-out forward and creating chances.

Sastre started his senior career with Independiente and stayed with El Rojo for eleven years, much of it spent forming a formidable attacking trident alongside Vicente de la Mata and Arsenio Erico. Erico had a phenomenal strike-rate, and De la Mata wasn't far behind either, but it was Sastre who was the creator, dropping deep to pick up the ball and then direct things for his team-mates. Sastre would inspire Independiente to two Argentine league titles, in 1938 and 1939, breaking the dominance of River Plate.

In 1942, now aged 31, Sastre left Independiente and moved to Brazilian club São Paulo where he would enjoy a brilliant swansong to his career, forming another fantastic partnership, this time with Leonidas, the World Cup Golden Boot winner from the 1938 tournament. They hadn't won a championship since 1931 and Sastre was influential in helping them to win three Paulista championships.

Unfortunately, he never got the chance to play in the World Cup, as the tournament he probably would have starred in, the 1938 World Cup in France, was boycotted by Argentina in response to the decision to hold a second successive World Cup in Europe. The other subsequent tournaments, 1942 and 1946, were cancelled because of World War II. However, Sastre did win the Copa America three times, which is no mean feat itself.

Sastre's legacy has been well documented in South America and has been widely praised for the beautiful footballing style which he adopted. César Luis Menotti, Argentina's manager from their 1978 World Cup triumph, once said, "Antonio Sastre was the best player I have ever seen. He was capable of playing in any position in a team.", whilst Vicente Feola, Sastre's coach at São Paulo, also recalled his influence, "he had the same importance to us as Zizinho in the 1950s and Gérson in the 1970s". But perhaps the greatest acknowledgement of Sastre's footballing pedigree was highlighted in 1980 when he was awarded his country's Diploma of Merit as one of the top five players in Argentina's history (the other four were Diego Maradona, Alfredo Di Stéfano, Adolfo Pedernera and José Manuel Moreno). If you're going to share an accolade, then that's pretty good company to keep!