In no particular order, ten of our favourite strike partnerships from the world of football... 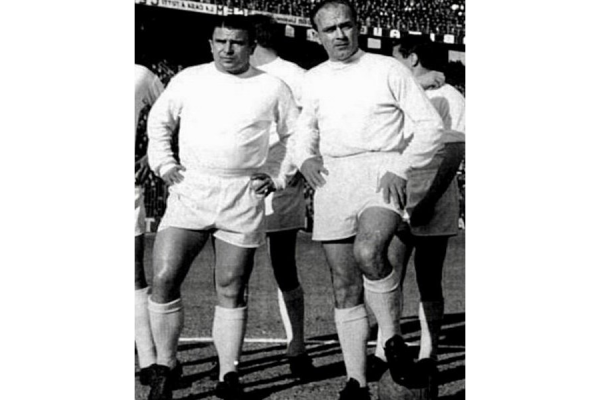 "The Galloping Major" and "the Blond Arrow" created a fearsome partnership at Real Madrid in the early 60s, Hungarian legend Ferenc Puskás and Argentine legend Alfredo Di Stéfano won two European Cup titles and four Spanish league titles during their time playing together at the Bernabéu.
In the 1960 European Cup final they shared all seven goals against Eintracht Frankfurt, Puskás scoring four and Di Stéfano scoring three. Puskas was a prolific forward, an out-and-out striker with a phenomenal goalscoring-rate, whilst Di Stéfano could literally play anywhere, dropping deep to get the ball and directing play from there. It was a tremendous combination. Strangely, having both represented different national teams, they would also appear together for Spain later in their careers in the 1962 World Cup qualification, both having taken Spanish citizenship during their time at Madrid. 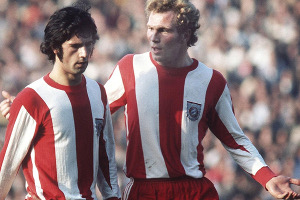 The stats say it all, 359 goals in 10 seasons at Bayern Munich in the 1970s. The partnership was a deadly combination of Hoeness' speed (it was claimed that he was the fastest player in Europe at the time, capable of the 100m in less than 11 seconds) coupled with the scoring instincts of one of the world's great goal poachers, Gerd Müller. It would help fire 1. FC Köln to three successive Bundesliga titles, followed by three successive European Cup victories, as the Bavarian giants took over from Ajax as the dominant force in Europe. Unfortunately, Hoeness would suffer a bad knee injury that would end the partnership and sadly lead to him retiring aged only 27. If it hadn't been for Müller's initial season at 1861 Nördlingen and a final fling with Fort Lauderdale Strikers then both would have been one club men for 1. FC Köln.

No.3 Gianluca Vialli and Mancini. SUB_FBL_CLUBS_PROFILES_ITALY_SAMPDORIA_LABEL_MENU] 1984-92

"I Gemelli del Gol" (the Goal Twins).
One of the great football partnership nicknames, and one of the great football partnerships.
The combination of Gianluca Vialli's power and athleticism alongside the classic number 10 creativity and vision of Mancini worked wonders at Samp - 231 goals from 1984-92, helping the club to its only Scudetto in 1991, along with four Coppa Italia titles and a UEFA Cup Winners Cup. 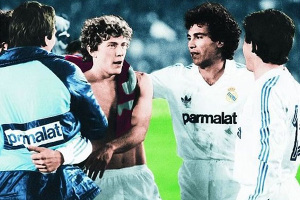 Apparently they didn't get on very well together, but it didn't really show on the pitch as their partnership fired Real to five consecutive titles from 1986-90. Mexican legend Sánchez was an exceptional goalscorer, winning the Pichichi award five years out of six in the 1980s. He was also capable of scoring spectacular goals, with a celebration to match. And whilst Butragueño didn't have the same scoring stats, he was also a tremendous player, a great all-round forward who was not only creative but could also hold the ball up fantastically and link the play, so whilst Sánchez often got the glory, it was Butragueño who was the key to making this such a successful partnership. 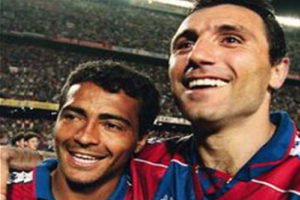 The spearheads of Cruyff's "Dream Team" for two seasons from 1993-95. Another great combination of creativity and prolific finishing, as Bulgarian legend Hristo Stoichkov wreaked havoc as a supporting striker with that lovely left foot, whilst Brazilian striker Romário was one of the era's great penalty-area players, with an exceptional strike-rate.
Steve Bruce and Gary Pallister are probably still having nightmares about them from Manchester United's Champions League encounter with Barcelona in 1994, when the Brazilian and Bulgarian tormented them throughout the 4:0 thrashing at the Nou Camp.

Over 200 goals as a partnership for Dynamo Kiev and Ukraine, this was one of the great partnerships of the 1990s. The pair helped Dynamo Kiev completely dominate the Ukranian league, winning the title every year they were partnered together from 1993 to 1999. Whilst both were really well-rounded forwards, Rebrov was probably the more adaptable and creative, with Shevchenko considered more of an out-and-out striker. However, whilst other partnerships saw one player often score more goals, in this partnership they were shared around almost equally. By the end of the 90s the big Western clubs were being alerted to their talent as they were ripping apart defences in the Champions League, their goals firing Dynamo to the quarter-finals and semi-finals before Milan's move for Shevchenko brought the domestic partnership to an end in 1999. 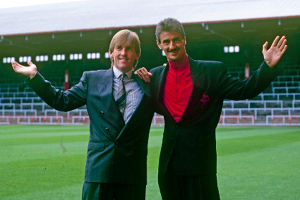 Two different styles of player who complemented each other perfectly. Rush's deadly finishing and Dalglish's guile made these two Liverpool legends a great British double-act of the 1980's. During their time at Anfield their partnership yielded two European Cup triumphs, four First Division titles, an FA Cup and four League Cup winners medals. 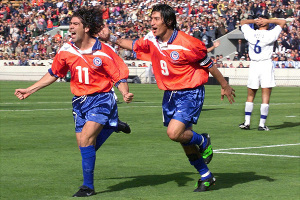 With nicknames such as Bam-Bam and as El Matador, it's no surprise that these two terrific forwards had a really energetic, all-action style.
They scored 59 times for Chile in the 90s, so it's no wonder that a few Serie A managers tried to pair them up together at club level. Unfortunately no-one managed it. 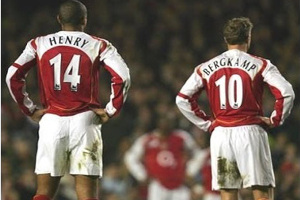 Six seasons of the Dutchman's craft and vision together with the Frenchman's electric pace and finishing yielded more than 200 goals. 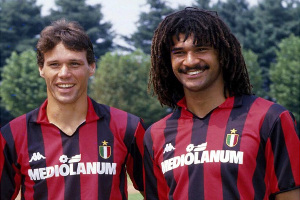 A great duo for both Milan and the Oranje.
Marco Van Basten was the classic striker, whilst Gullit could play just about anywhere around him. Unfortunately, an ongoing injury meant that Van Basten played his last game aged only 28, and he had to officially retire two years later. 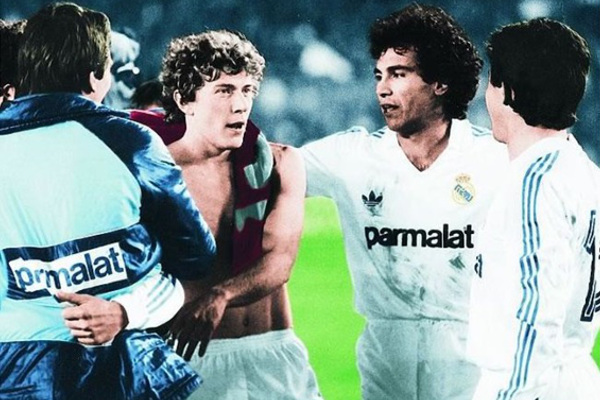