It's hard to describe what an incredible speech/rant this is from Norwegian commentator Bjørge Lillelien at the end of the match between Norway and England in Oslo, a World Cup qualifier for España '82. England had beaten Norway 4:0 at Wembley in the opening game of the group, so went into the return match as clear favourites, and when Bryan Robson opened the scoring after fifteen minutes it looked like another drubbing could be on the cards. However, two goals before half-time put Norway ahead and they held on for a famous victory, at the time one of the greatest in their football history.

As the final whistle is blown, a jubilant Lillelien begins his fantastic monologue, alternating between Norwegian and English to make it sound even crazier, taunting England with a list of historical figures, goading Prime Minister of the time Maggie Thatcher, and triumphantly declaring his side to be the best on the world! It's brilliant stuff.

The commentary was a mixture of Norwegian and English, but we've translated it all into English for the full effect...

Norway have beaten England 2-1 in football!

It is unbelievable! We have beaten England!

England - the home of giants.

We’ve beaten them all!

Maggie Thatcher can you hear me?

Maggie Thatcher, I have a message for your election campaign.

We have a message for you.

We have knocked England out of the World Cup.

Maggie Thatcher, as they say in your language in the boxing bars around Madison Square Garden in New York: “Your boys took a hell of a beating!"

Your boys took a hell of a beating!

It's Norway two, England one. What a fabulous night for football.

With no home nations at the Euro '84 tournament, both the BBC and ITV decided to almost completely ignore the tournament. Luckily, for the epic semi-final encounter between France and Portugal, there were some Saturday night highlights, so we got to hear John Motson completely lose his shit when Michel Platini grabbed a late winner for the hosts in Marseille!

Tigana. Two to his right. And Platini through the middle.

I’ve not seen a match like this for years!

A brilliant piece of commentary from the 1986 World Cup quarter-final clash between England and Argentina, all thanks to Bryon Butler's wonderful tone and use of words.

The opening line, "turns, like a little eel”, is magnificent, and then it builds to a fantastic crescendo as Diego Maradona completes his incredible run to make it two-nil.

He comes away from trouble.

Comes inside Butcher, leaves him for dead.

Outside Fenwick, leaves him for dead.

And puts the ball away...

And that is why Maradona is the greatest player in the world...

He buried the English defence.

An iconic piece of commentary from Kenneth Wolstenholme. The climax is setup brilliantly when he notices fans coming onto the pitch, and it couldn't have been scripted any better as Geoff Hurst lashes in the fourth goal...

(Notices some of the fans spilling onto the pitch)

Some people are on the pitch!

They think it's all over!

Simple, but classic. Can anyone ever tire of hearing these couple of lines from Barry Davies in the match between Manchester City and Derby County? Not us.

Describing a shot as "interesting" shouldn't really work, but for some reason it does. As for the "just look at his face" quote, the reason Franny Lee was particularly happy was that Manchester City had sold him to Derby County in the summer, against his will, so going back to Maine Road and grabbing the winner against his former club was a sweet moment indeed.

Look at his face!

Just look at his face! 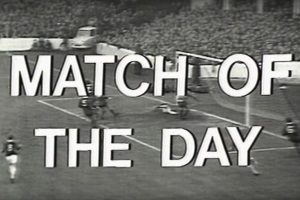 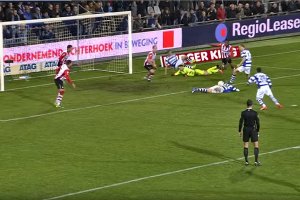