The 20 Greatest Italian Goalkeepers of All Time 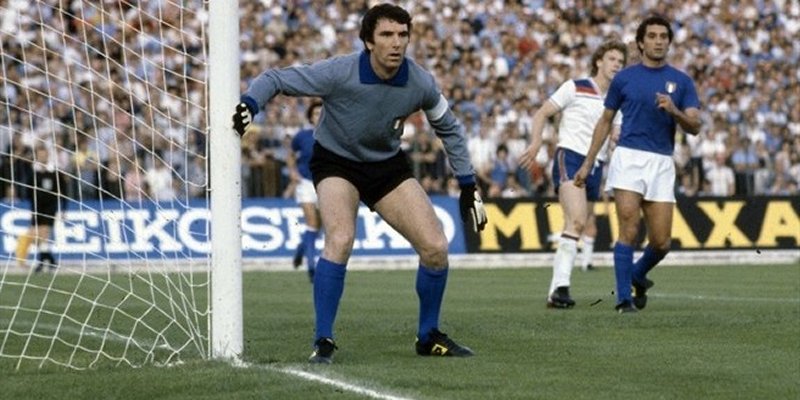 When it comes to goalkeepers, no other country in the world can match the depth of quality that Italy has produced over the years.

Despite legends Dino Zoff and Gianluigi Buffon dominating the Azzurri's number 1 shirt for years on end, Italy has still managed to produce so many other great keepers over the years.

So, here's 20 classic Italian goalkeepers, in no particular order, as they're all quality...

Where else to start but the great man himself. A career spanning 22 years, 15 of them with the national team, culminating in World Cup glory in 1982 as the 40 year-old Azzurri captain.

Zoff broke goalkeeping records galore. He still holds the record for the longest playing time in international tournaments without conceding a goal (1142 minutes between 1972 and 1974), whilst at the time of his retirement he'd set a whole host of other records; most Serie A appearances (570), most consecutive Serie A appearances (332), longest consecutive run without conceding a goal in Serie A (903 mins), most consecutive clean sheets in Serie A (9) and the eldest Serie A player (41 years old).

Your archetypal classically flamboyant keeper. He was the Azzurri's number 1 when they hosted the Italia 90 World Cup, setting a record of five consecutive clean sheets during the tournament.

Born in Milan, he's an Inter legend, with 16 years at the San Siro. He later played for Sampdoria, Padova and finally New England Revolution.

Regarded as one of football's first great keepers, Combi was a one club man with Juventus, winning five Serie A titles with the Old Lady in the 1920s and 1930s.

He's best known for captaining Italy as they won the World Cup on home soil in 1934.

Under six foot tall and with a really stocky build, Peruzzi may not have looked like a typical keeper, but he was fantastic nonetheless.

Great reflexes, agility, positioning and strength, all made him one of the top keepers of the 1990s.

Having started out with Roma and Hellas Verona he then had a fantastic eight year spell with Juventus, winning three Serie A titles and the Champions League.

Classic eccentric keeper of the 1960s and 70s, with a 26 year career that resulted in more than 500 Serie A appearances.

Acrobatic and spectacular, Albertosi had lengthy spells with Fiorentina, Cagliari and Milan, winning the Scudetto with the latter two and the UEFA Cup Winners Cup with Fiorentina.

Galli took over from Dino Zoff as Italy's number one when the great man finally retired in 1983. He had nine years at Fiorentina from 1977-86 before heading for the San Siro and a four season spell with Milan, during which he won two European Cup titles and a Scudetto.

The cousin of Gigi Buffon's grandfather, Lorenzo was a superb shot-stopper, and his displays for Milan in the 1950's earned him the nickname "Lorenzo il Magnifico" as Milan won four Serie A titles with him between the sticks.

Buffon moved to rivals Inter after a short stint at Genoa and also captained Italy in the 1962 World Cup.

Having played outfield in his younger days, Toldo was decent with the ball at his feet but he was best known as a penalty-saving specialist.

Toldo would undoubtedly have picked up many more than 28 caps for Italy if it hadn't been for a certain Gianluigi Buffon.

Juventus keeper for nine seasons in the 1960s, Anzolin only managed one cap for Italy as Enrico Albertosi got the nod as no.1 for much of that time.

He was nicknamed "la Zanzara" (the mosquito") due to his small size and slender build. But what Anzolin lacked in size he made up for in agility - a fantastic shot stopper with great reflexes.

Fantastic all-round keeper who, despite being a bit more reserved than some of the others on this list, had a bit of everything to his game - shot-stopping, claiming crosses, good penalty-saving record.

Marchegiani was part of the last really decent Torino side of the early 90s which won the Coppa Italia and finished runners-up in the UEFA Cup. However, he's actually best known for his 10 years at Lazio - winning the Scudetto in 2000.

A goalkeeping legend for two clubs. Firstly at Fiorentina where he spent nine years and helped La Viola win their first Serie A title in 1956. And then as part of the "Grande Inter" team that conquered both Italy and Europe.

Sarti revolutionised the role of the goalkeeper in Italy, functioning as a "sweeper keeper" by coming out of his area to get involved in build-up play and acting as an extra defender.

Juventus legend who literally won everything there was to win with the Old Lady in the 1980s after succeeding Dino Zoff between the sticks at the Stadio Comunale.

Tacconi is the only keeper to have won the European Cup, UEFA Cup, UEFA Cup Winners Cup, Super Cup and Intercontinental Cup.

As with many fine keepers he didn't win as many international caps as he might have hoped as another goalkeeping legend was in pole position - in Tacconi's case it was Walter Zenga.

Poor old Ivano Bordon. Imagine being a top-notch Italian goalkeeper in the 1970s and early 1980s only for it to coincide with one of the greatest keepers of all-time - Dino Zoff.

To be fair, given Zoff's incredible runs of appearances, Bordon did well to get 21 international caps.

Solid and reserved, he had 13 years at Inter from 1970 to 1983 before spending three years with Sampdoria.

Pagliuca was a fantastic, all-action, acrobatic keeper who was one of the legends of that great Sampdoria team of the late 80s and early 90s, winning the Scudetto in 1991. He played seven seasons at the Stadio Luigi Ferraris before being sold to Inter in 1994 for Â£7 million (a world record for a keeper at the time).

He had five seasons at Inter before a great seven-season swansong at Bologna from 1999 to 2006.

Pagliuca played for the Azzurri 39 times between 1990 and 1998, and was first choice at USA'94. He played in the final against Brazil in 1994 and became the first goalkeeper to save a penalty in a World Cup final shootout after he saved Marcio Santos's effort. But it wasn't to be, as Baresi, Massaro and Baggio all missed and Pagluica had to settle for a runners-up medal.

A tremendous keeper from the 1940s, Bacigalupo was at the forefront of the post-war modern keeper style, with excellent positional sense and a great ability to come off his line at the right time.

Bacigalupo started out with a couple of seasons at Savona and Genoa, before he was bought by Torino in 1945. He won four Serie A titles in a row as part of the Grande Torino team before tragedy struck in 1949 when he was killed in the Superga air disaster, aged only 25.

Nicknamed "Sentimenti IV" as he was the fourth of five brothers who became professional footballers (only the eldest brother didn't), Lucidio had lengthy spells with Juventus and Lazio in the 1940s/50s and played in the 1950 World Cup finals in Brazil.

Sentimenti became one of the game's first goalscoring-keepers - he'd previously played in outfield positions when he was younger and so occasionally took penalties when he was a keeper, something that was almost unheard of back then. Not only was he great with the ball at his feet, he was extremely agile and quick off his line, reading the game as well as any other keeper of the era.

Roma legend who was a key part of that fantastic team that won the Serie A title in 1982-83 and then finished runners-up in the following season's European Cup. Another relatively small keeper at 5ft 10, what Tancredi lacked in height he made up for with speed and agility. He was also known for his one-armed diving technique, similar to Russian keeper Rinat Dasayev's style.

Milan stalwart in their great era of the 1990s when they won five Scudetti, in 1994 Rossi broke Dino Zoff's 21 year record when he set the longest streak without conceding a goal in Serie A history - 929 minutes.

Incredibly, he never made a single appearance for the national team.

Spectacular keeper from the 1950s and 60s who crossed the great Milan divide, starring between the sticks for both Inter and Milan. Ghezzi had a fantastic all-action style, his acrobatic saves and reputation for his speed rushing off his line lead to his brilliant nickname - Kamikaze.

Ghezzi started out with Rimini and Modena before moving to Inter in 1951. He had seven seasons at the San Siro, winning two Serie A titles, before transferring to Genoa in 1958.

Ghezzi had a great rivalry with Lorenzo Buffon, and they shared a number of similarities both on and off the pitch - they were cross-city rivals in the 1950s when Ghezzi was at Inter and Buffon was at Milan. And then in 1959 Ghezzi moved from Genoa to Milan, whilst Buffon went the other way. And they became cross-city rivals again a year later when Buffon moved to Inter! And finally, off the field, Ghezzi also dated the Italian TV star Edy Campagnoli, who later went on to marry Buffon!

We started with Zoff. We finish with Buffon.

The archetypal modern keeper - athletic, agile, acrobatic, powerful, great positional sense and fantastic with the ball at his feet, Buffon was also a leader. Yes, he had just about everything, but it's also his consistency that puts him head and shoulders above many of his rivals. He literally seems to have been around forever, playing at a great standard from his early days with Parma in 1995 through to his 17 year spell with Juventus and subsequent year at Paris Saint-Germain (adding the Ligue 1 winners title to his list of honours) and then Juventus again.

He's been a curse for Italian keepers since the late 90s, completely dominating the number 1 shirt of the Azzurri in a 21 year career spell that resulted in an incredible 176 caps and reached its pinnacle with the World Cup triumph in 2006.

Italy has produced some fantastic goalkeepers over the years but for us, Gianluigi Buffon reigns supreme. 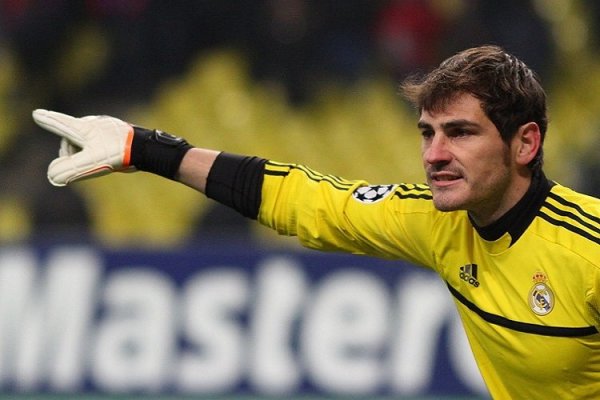 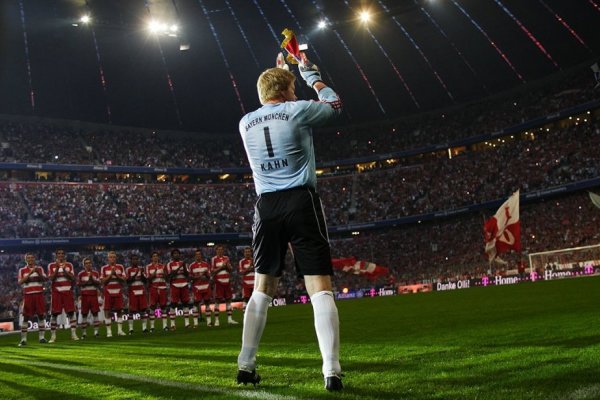 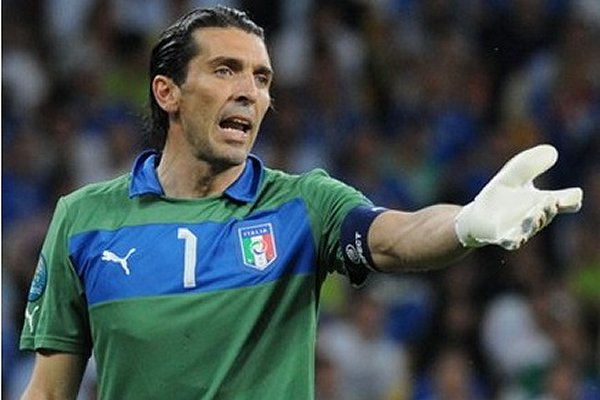